Management of CIT includes dose reduction and/or delay in initiation of further cycles of chemotherapeutic regime, platelet transfusion, and use of thrombopoietic agents. There are no guidelines to treat CIT; it is based on the patient factors such as risk of bleeding tendency and co-existing morbidities. At present, the US Food and Drug Administration has approved recombinant interleukin (IL)-11 (oprelvekin) for thrombocytopenia induced by chemotherapeutic agents. However, its use is not justified because of its side effect profile and as it demonstrates only modest efficacy.8,9 Over the years, there have been many thrombopoietic drugs evaluated for supportive therapy in CIT. One such novel agent is thrombopoietin receptor agonists like eltrombopag, romiplostim with promising results and lesser potential for immunogenicity. On the other hand, it remains unclear whether use of this agent during chemotherapy is beneficial for cancer outcome due to its adverse effects, cost limits, affordability and accessibility.10,11 Therefore, optimizing the management of CIT remains a significant area of research due to unmet need of patients with thrombocytopenia.

Carica papaya belongs to the plant family Caricaceae, is an economically important fruit crop worldwide. Many scientific works have been carried out to evaluate the benefit of different parts of papaya plant including fruits, seeds, leaves, rind, shoots, roots or latex.12 The leaf is considered non-toxic as its lethal dose is >15 g/kg body weight.13 Recent studies showed that C. papaya leaf extract has potential anti-sickling (inhibition of sickle cell formation) properties.14

The capacity of papaya leaf extract to reverse the lowering of blood cells, especially platelets, is gaining attention in recent times. A study was aimed to investigate the potential role of fresh Carica papaya leaf extract on hematological and biochemical parameters and toxicological changes in a murine model.13 Fresh C. papaya leaf extract significantly increased the platelet and RBC counts in the test group as compared to controls.15 Therefore, it is very important to identify those phytochemicals of C. papaya leaves as it can be recommended to be used as a medication to boost thrombopoiesis and erythropoiesis in humans and in animals in which these cell lineages have been compromised.14,16

Tinospora cordifolia commonly named as "Guduchi" in Sanskrit belongs to family Menispermaceae. A variety of active components derived from the plant like alkaloids, steroids, diterpenoid lactones, aliphatics, and glycosides have been isolated from the different parts of the plant body, including root, stem, and whole plant. Recently, the plant is of great interest to researchers across the globe because of its reported medicinal properties like anti-diabetic, anti-periodic, anti-spasmodic, anti-inflammatory, anti-arthritic, anti-oxidant, anti-allergic, anti-stress, anti-leprotic, anti-malarial, hepatoprotective, immunomodulatory and anti-neoplastic activities.17 A study performed on busulfan induced thrombocytopenia in rabbits showed that Tinospora cordifolia was able to improve platelet count in the test animals.18

Some studies have been published previously using Carica papaya and Tinospora cordifolia to analyze their therapeutic potential in thrombocytopenia but none of them have checked therapeutic effect in CIT patients. We here performed a clinical trial on patients with different type of cancer to show the beneficial effect of UPLAT in CIT patients.

The study was conducted on 60 (40+20) subjects; 40 subjects consumed UPLAT and 20 consumed placebo at two different study sites (Table 1 and Figure 2). Subject study completion was considered once subject has completed all mandatory visits till visit 7 (Day 16) with all procedures done as per protocol (Table 2). Subjects were identified by unique subject identification (ID) number that remained consistent for the duration of the study. Upon completion of all the required screening/baseline assessments, eligible subjects were enrolled in the study, allocated and treated as per the procedures mentioned in the protocol by the investigator or authorized site staff (Figure 1). All participating investigator took respective ethics committee approvals before initiating study at the site. All the documents (Protocol, ICF, CRF, any other study related document being utilised in the study) were approved by IEC/IRB. Informed consent was obtained from all the subjects before any study related procedures were carried out. In obtaining and documenting informed consent, the investigator complied with applicable regulatory requirements, and adhered to ICMR Ethical Guidelines for Biomedical Research on Human Participants, International Conference on Harmonisation Guideline-Good Clinical Practice (ICH-GCP) and the Declaration of Helsinki. Subject confidentiality was maintained throughout the study by study specific codes. Study was registered on CTRI with CTRI number CTRI/2018/02/012064 [Registered on: 21/02/2018].

Table 1: Sites where the studies were conducted. 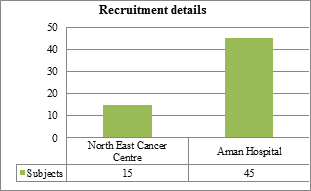 A screening/baseline visit was performed within 30 days of the scheduled treatment allocation visit. If eligibility criteria were met, the subject was approached to obtain written informed consent. The purpose of the study participation, benefits and risks of the procedures were explained to the subject. Subjects who agreed to study participation signed an EC approved consent form.

The following assessments were performed on screening visit and the results were recorded on the appropriate subject case report form (CRF):

After screening visit, each subject was advised to return facility/clinic for baseline and treatment allocation visit.

Compliance card was issued to subjects in order to ensure that study product have been ingested timely and accurately. All subjects were encouraged to fill compliance card after ingestion of each dose (by marking as tick). Subjects were advised to return filled compliance card and empty strips along with unused units (if any) in strips at scheduled compliance visit. If a subject missed any of doses during study treatment period, same was captured as cross mark on compliance card and next dose was doubled to make up per day requirement. Compliance card and strips (product accountability) was retained from each subject at this visit. All information was documented in CRF. Each subject was advised from return to clinic/facility for blood collection visit to central lab.

End of Study CRF section was completed for each subject included in the study. Reason for study exit as well as the date of study exit was documented in CRF. Subjects were advised that they may voluntarily withdraw from the study at any time and were instructed to notify their investigator of their decision immediately. Subjects had the liberty to choose to withdraw for any reason and were not obligated to reveal their reasons for withdrawal to study treatment.

Statistical analysis was done as per the Statistical Analytical plan (SAP) of the study. All statistical tests were performed using SAS® Version 9.1.

A total of 60 patients were recruited after consideration of all the clauses mentioned in the inclusion-exclusion criteria. Patients were randomized and were divided into two groups; Group A (n=40) which received the test product UPLAT and Group B (n=20) which was administered placebo. The platelet count was measured at Day 1 and Day 15.

Table 3: Gender distribution between the groups. 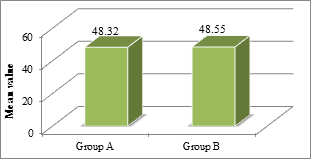 Figure 3: Age distribution between the groups.

Figure 4: Distribution of type of cancer between the groups.

Table 4: Comparison of platelet count between the groups at Day 1 and Day 15.

Table 5: Comparison of mean change in platelet count from day 1 to day 15 in Group A and Group B.

After the execution of the study plan, it was observed that there was significant increase in the number of platelets in Group A after the oral administration of UPLAT as compared to the placebo Group B (Table 4). The mean changes in platelet counts of both the groups from day 1 to day 15 are shown below. It is evident that the subjects in the intervention group who received UPLAT could attain significantly higher increase in platelet count when compared to the control group (Table 5).

Thrombocytopenia is one of the major medical side effect encountered in cancer patients during the administration on chemotherapy. It usually occurs after 6-10 days of the chemotherapy session and its severity depends on the dose and type of the chemotherapeutic drug. When a patient becomes susceptible to the thrombocytopenia after administration of chemotherapy, continuing the therapy becomes equally dangerous to the severity. As, low count of platelet in the blood increases the risk of bleeding in the patient.9

This side effect not only affects the treatment regimen but also pose financial burden on the patient. The treatment of CIT either involves altogether stopping or delaying the chemotherapy or use of management regimen which includes platelet transfusion or administration of recombinant thrombopoietin analogs. Treatment with thrombopoietin analogs has its own limitations which include generation of autoantibodies which can further worsen thrombocytopenia. Even platelet transfusion can lead to infusion reactions thereby making this mode of therapy too unreliable. It would not be wrong to say that CIT is still an unmet medical need and requires extensive research to develop natural/alternative medicines that would help in management of CIT.9

The test formulation was able to justify its effect by inducing an increase in number of the platelet count in the blood of the treated group. The effect produced is supported by a study performed on dengue patients in whom platelet count was improved by administration of using Carica papaya leaf extract.16 Similar results were also produced in a study performed earlier by sole use of Carica papaya leaf extract in CIT patients as well as in patients with viral infection further supporting its positive effect in platelet compromised patients.19,20 Similarly, Carica papaya and Tinospora cordifolia in combination was also able to elevate the liver cirrhosis induced thrombocytopenia, there by further establishing its effect in platelet compromised patients.21

This study was performed to test efficacy of marketed formulation of UPLAT capsules; 350 mg of Carica papaya and 150 mg of Tinospora cordifolia in Cancer patients suffering from thrombocytopenia as a side effect of chemotherapy. The results show that UPLAT can be given as a supporting therapy to CIT patients to minimize the bleeding possibilities without compromising with the chemotherapy regimen, to support better treatment and reduce the financial burden on patients.

The result of the study showed that study product UPLAT increased level of platelet count with no noticeable adverse events within 1-15 days. No significant change was found in pre and post-treatment level of biochemical values other than hematology panel. No sign or symptom of UPLAT related injury was found over the treatment period and there was no treatment related death. Thus oral use of UPLAT® was found to be safe and demonstrated a clinically & statistically noteworthy outcome in raising platelet count on chemotherapy induced thrombocytopenia.

Conflict of interest: None declared

Ethical approval: The study was approved by IEC/RBC and registered on CTRI with CTRI number CTRI/2018/02/012064

How to cite item